The Pursuit of Happitude 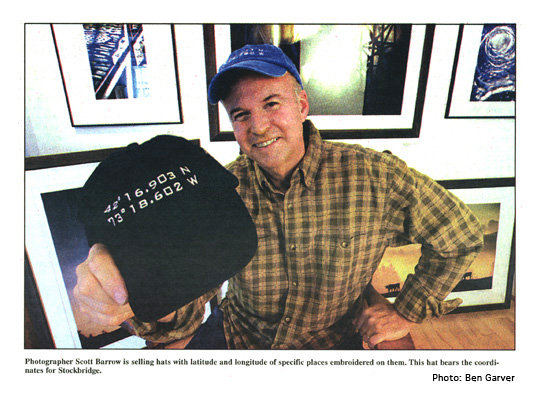 The Beckwith and Barrow Gallery, lofted above Bistro Zinc in Lenox, looks at a glance like any other art gallery. Prints and paintings — the work of landscape photographer Scott Barrow and his wife, Karen Beckwith, respectively — hang throughout the well-lit interior and lie canted against the walls.

But you won’t find the project that commands the bulk of Barrow’s attention these days in any frame.

The caps that litter the room don’t look like much at first blush, their spare numbering embroidered unpretentiously into cotton-twill fabric.

They’re strewn about the room according to an aesthetic that falls somewhere between method and madness, hanging from hat hooks and vaguely head-shaped knobs, slowly taking over all the available desk and shelf space. In their careless ubiquity, the hats give the impression of having been discarded all at once by a youth baseball team and might strike the casual viewer as irrelevant clutter. But they can catch the right kind of eye.

“Two women came in to look at photography,” Barrow told me during an interview in the gallery, “and while they were here looking around, one of them asked, ‘What’s up with the Advertisement hats?’ So I told them the story of Happitude.

“This whole idea with the hats is about connection to place,” he explained. “It started because of my connection to the closest thing I’ve ever had to an old family homestead, my grandfather’s Mich-igan cottage. The heart of Franklin’s Folly, as it’s called, is a 12- by 12-foot dock that sits on the small lake out front. For me, that dock is the best place on Earth, ‘the center of the Barrow Universe.’

“Then one day it occurred to me that with a GPS device, I could determine its exact location. So I took a reading and used those coordinates to create a reminder of that place, one I could carry with me. It was the first Happitude hat.”

Barrow’s business Web site,. happitude.com, defines the word “happitude,” a contraction of “longitude” (or “latitude”) and “happiness,” as “the point where longitude, latitude and happiness connect.”

“I just couldn’t bring myself to say, ‘Let us help you find your happy place,’ ” he said, “so I made up the word I needed.”

When he talks about Happitude, his face lights up, and he gives the impression that he wants each customer’s experience to be as personal as his has been.

“Each of these hats is custom,” he explained. “They’re very particular to a place. It doesn’t get any more specific than GPS coordinates.

“They’re not hats that come over in bulk from China for $1.50 apiece. All the embroidery is done locally. From a wholesaler’s standpoint, you don’t make money on these hats because customizing them and ensuring their quality is too expensive. But some things are more important than money.

“It’s all about memorializing these places where you undergo really positive, personal experiences,” he added. “You go and you come back with more than you went with.”

The Happitude hat aims for elegant minimalism. A set of latitude and longitude coordinates (carried to the minute’s third decimal) are sewn cryptically above the bill, where a sports or brand logo is typically found.

Unless you’re a cartographer savant or happen to be carrying a GPS device, it’s impossible to know where the coordinates lead without looking above the adjustment strap in back, where the location’s name is embroidered.

Barrow is frequently asked, “Where’s your hat?” The question delights him.

“The other day,” he said. “I saw a couple of people walking down the street in opposite directions — strangers — both wearing the hats, and they stopped. I could see them taking the hats off and comparing them. I think they were checking to make sure they actually had two different numbers. And then they just struck up a conversation.”

Barrow has resisted the often lucrative pitches lobbed at him for hats advertising specific shops or private locales that he sees as crassly commercial. Happitude is about self-expression, he explained, not promotion.

“I don’t want the hats to be advertisements. They’re really generic-looking, very simple and direct even though they’re very specific, so they also appeal to the kind of people who want a really good-quality Polo shirt, but don’t want to advertise for Polo with that little logo. No one knows what it is unless they happen to have the same numbers. It’s a personal statement.”

With his mild demeanor and easy smile, Barrow makes an unlikely entrepreneur, and in a way the hats match his personality. His decision to expand the project beyond the initial memento stemmed not from acquisitive ambition but from a firm belief in the universality of the hat’s appeal and an earnest desire to share the pleasure it had brought him.

“I’m not trying to take over the world,” he said with a sly grin. “When I started, I thought, ‘Doesn’t everyone have a dock?’ I came back to the Berkshires, and I realized I live in a place where hundreds of thousands of people come every year to have a shared personal experience — at Tanglewood, Jacob’s Pillow, Kripalu, whatever. I came up with the idea in January, and the first hats were delivered in May.

Barrow, who has “a healthy aversion to debt,” decided to shoulder Happitude’s start-up costs himself instead of seeking venture capital through investors. The hats themselves have been essentially self-sustaining since the first sale, but he turned to his photography business to fund ancillary expenses such as Web site design, initial production and manufacture costs and employee salaries, including offsetting his wife’s substantial volunteer committment (she is the project’s chief designer).

“I started off with Tangle-wood because I wanted to see myself sitting on the lawn, listening to music, having a glass of wine and seeing my hats. It was just a vision I had. And it was really fun to go over there this summer and see my hats during a concert.”

“Not long after Happitude was born,” he said. “I went up to Block Island for three days with my wife, and while I was there we sold hats. I sold 100 hats on Block Island, which isn’t a huge amount, but it was to a small store there, and, two weeks after they were delivered, the proprietor called to order more hats.”

Happitude’s scope has expanded rapidly. After conquering his favorite Berkshire getaways, Barrow moved on to Carnegie Hall in New York, where the staff eagerly accompanied him to the roof to take GPS coordinates.

“We just added 14 more (such vendor locations), but my 21-year-old Webmaster, a local whiz kid from Stockbridge named Baron Drumm, went back to college and I haven’t gotten around to updating the site,” he admitted.

Of course, Happitude is hardly limited to prefabricated locations. The whole point of the project, in Barrow’s formulation, is a highly personal, individualized experience. To that end, the Web site provides a convenient way for customers to determine their desired GPS coordinates before placing a custom order (of at least 24 hats, ideal for parties, family reunions, wedding gift baskets, etc.).

“We wanted to come up with a way to make it easy for people to get their coordinates to us, so we figured out a way to embed Google Maps within the site,” Barrow said. “The maps aren’t always as accurate as the satellite images, so I had Baron enable users to grab the marker and drag it. And as you do that, it changes the coordinates. And it’s really fun when you get the hat to go to Google Maps, type in these coordinates and get a visual that takes you right to the spot.

“One of the nice things about the hats is that they take this incredibly sophisticated, complicated, technologically advanced concept and wrap it up in a strong emotional element.”

That multimedia synergy is not only an amusing curiosity; it also serves a practical purpose.

“It’s an interactive hat in more ways than one,” Barrow said. “First there’s the whole GPS element. And the hand tag not only tells you about Happitude, but also has a postcard attached,” which, in the spirit of the whole project, provides both an opportunity to connect with a distant friend and an organic, word-of-mouth advertising medium.

Fueled by a growing legion of devotees, Happitude has taken little more than four months to exceed Barrow’s expectations. Orders have begun coming in from as far as California and sales now sustain the entire project.

“It’s been really well re-ceived by people who understand where I’m coming from, which is gratifying — which is enough. If it’s commercially successful, that’s great. I’ll put the kids through college. And on whatever level it’s successful, it’s been really fun.”